Door County is known primarily as a beautiful stretch of peninsula, but what many don’t know is that there is an array of islands accessible by boat that offer unique experiences and new adventures. There are a total of 35 islands that pepper the waters surrounding Door County, but only a few are readily accessible. 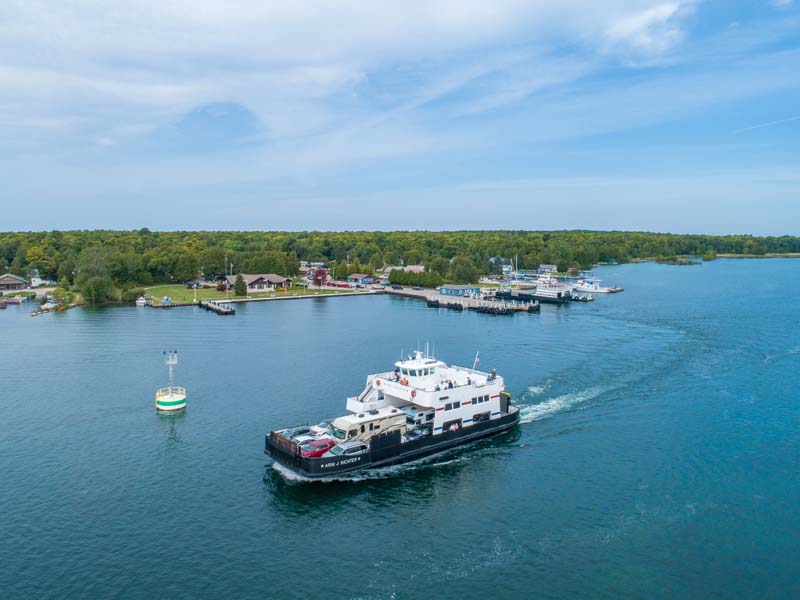 The main island you have likely heard of or visited is Washington Island. It is by far the largest island and is the only year-round community. The Washington Island Ferry Line services the island daily, even in the winter when the ice begins to form and requires an icebreaker. Washington Island is home to these favorite attractions that convince visitors to cross “death’s door,” the waterway between the mainland and the island, again and again.

Some have called this beach the most beautiful bay in Door County. That title will always be contended, but the rocky shoreline of Schoolhouse Beach is a special and unique place in many ways. The beach is made up of smooth stones created over centuries. Water has slowly transformed the bedrock bay into a place where families can play and swim, and there’s even a diving dock to tempt those second guessing a dip.

The Washington Island Stavkirke will make you feel like you traveled through time and over oceans to the far shores of Norway. “Stavkirke” or “Stav Churches” are located throughout Europe, with the greatest concentration of them in the Scandinavian lands. The Washington Island building, built in 1999, was modeled after the Borgund Stavkirke constructed in 1150 near Laerdal, Sogn. Sitting in a small forest grove, a winding prayer path leads the way to the structure and is used year-round for special worship services and as a place of quiet meditation

Washington Island is home to two gorgeous lavender farms that are open to visitors and provide a picture-perfect pit stop. The first, Fragrant Isle, has over 20,000 lavender plants on site. Visitors can pick their own lavender bouquet, purchase lavender plants during spring to early summer, and visit the Production Barn to see and learn how the pure lavender essential oil is distilled.

The other, Island Lavender at the Historic Dairy Barn, has been growing lavender and producing hand-made lavender gifts and products since 2013—from body lotions and essential oils to dryer bags and culinary seasonings. Visit the shop and walk the fields for an experience to awaken all your senses.

The Island Adventure Company offers all you need to see the sights from land or water. Take a boat tour and be guided around the shallow harbors and bays, or paddle yourself over to Rock Island via kayak. Or, stay on dry soil and explore via a UTV, which are able to ride on all roads on the island, which is about 7 miles across. 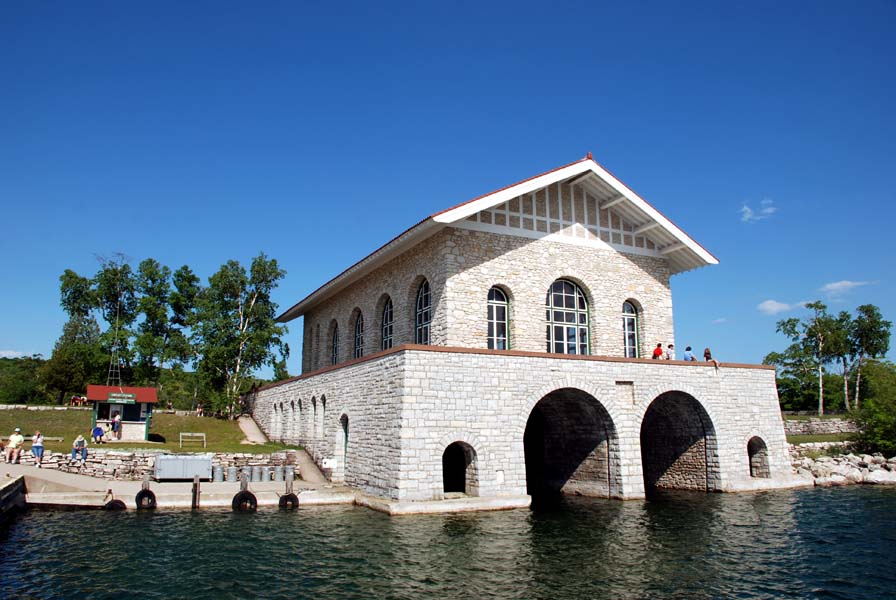 From Washington Island, you can reach another island—Rock Island! Reaching it requires you to take another ferry, called Karfi, from Jackson Harbor. The ferry is a passenger ferry only, meaning cars and bikes are not allowed. Rock Island has 10 miles of hiking trails, Wisconsin’s oldest lighthouse, campsites, and a beautiful historic boathouse that will have you amazed at its story and grandiose design.

Plum and Pilot Islands lie between Washington Island and the tip of the peninsula, but they don’t have ferry access. However, in 2017, a dock was restored on Plum Island, opening it for public access. The effort was spearheaded by the non-profit organization The Friends of Plum and Pilot Island in partnership with The U.S. Fish and Wildlife Service. Boats can now use the dock during daytime hours.

Just north of Baileys Harbor you’ll find a secluded island that is, on many days, walkable! Cana Island is a small island that is home to the Cana Island Lighthouse, which this year is celebrating its 150th anniversary. For a small fee you can visit the lighthouse and climb the spiral stairs for a beautiful view. Or, join the twice annual Lighthouse Festival tours, in June and October, to get a rare perspective of many of Door County’s lighthouses.

The Grand Traverse Islands, which include Rock Island, Gull Island, Little Gull Island and Gravelly Island, lie in the gap between Door County, Wisconsin, and Upper Michigan's Garden Peninsula. The islands are a richly biodiverse, historically significant, and largely undeveloped wilderness archipelago. Here, rare wildflowers and orchids found almost nowhere else on earth call them home; songbirds, bats, and butterflies return to them each and every summer, and lake fish spawn in their shallows by the thousands. Part of the vast Niagara Escarpment, stretching all the way to Niagara Falls, these islands consist of dolomitic limestone rock formed over 420 million years ago from the compressed sediments of a shallow, tropical sea.