Door County tourism, in its simplest form, began in 1855 when Asa Thorp, a lumberer and barrelmaker by trade, set the foundations of current-day Fish Creek: a humble dock on the waters of Lake Michigan from which he sold lumber and fuel to ships passing by the harbor.

During this time, Thorp opened the doors of his private homestead to traveling ship crews and salesmen, laborers, and others who were passing through the area. He started out merely renting rooms but, as the village thrived and word got out about Door County, these short-term workers and businesspeople returned with their families to enjoy a vacation or to settle permanently.

Seeing the potential, Thorp and his family expanded the property to include The Thorp Hotel as well as individual cottages, many of which are still standing.

Certainly Thorp was not the first person to set foot on the peninsula—Native Americans as well as other settlers, explorers, fur traders, missionaries, and others were here long before his time—nor was he the first to start a business in the area. But, Thorp was among the very first to start a business that relied on transportation and tourism and benefited directly from the increasing popularity of leisure travel. 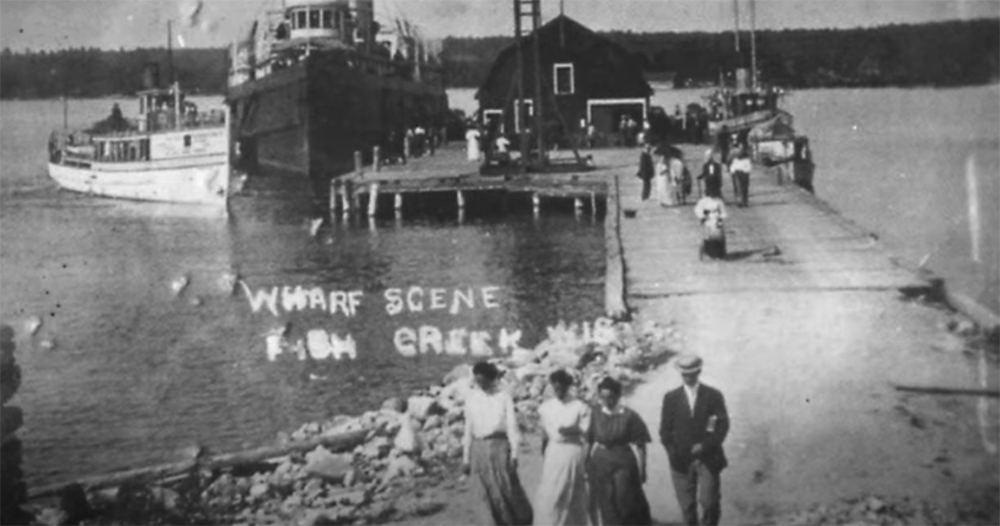 By the early 1900s, leisure tourism as a distinct industry was well established in the region, and Door County was seeing steady increases in visitor numbers each year.

Word had gotten out that the area was rife with beautiful scenery and that Lake Michigan was a “natural air conditioner,” making it the perfect place to escape the hot, increasingly crowded and industrialized urban centers where most middle-class and upper-middle-class Americans lived. Some stayed a weekend to marvel at the sights, others weeks or months to enjoy beaches, blossoms, cherries, water sports, and outdoor spaces.

The popularity of steamer-ship travel in general and the Goodrich Steamer Line (a new passenger ship system carrying travelers around the Great Lakes) in particular contributed to this surge, as did the later expansion of Wisconsin’s railway system, which could now transport visitors as far north as Sturgeon Bay from Milwaukee, Chicago, and beyond.

In addition, even the remotest parts of the peninsula and Washington Island were becoming more and more accessible and commercially and recreationally developed, thanks to the ever-expanding network of local highways and gravel roads designed to accommodate the newly popular Model-T car and eventually other personal vehicles.

At the same time as all this development was taking place, residents’ passion for the peaceful natural landscapes and bountiful wildlife—the things that often brought them here in the first place—remained strong, and communities were beginning to establish many of the nature preserves, trails, marinas, beaches, nature conservancies, preserves and protected areas, and state, county, and municipal parks that endure to this day.

Popular nature spaces established in this period include:

This rise in tourism in the early to mid-1900s is also attributable to the burgeoning performing arts scene in Door County. Musicians, theatre groups, and others who had discovered the region on family or business trips began coming back and slowly forming professional theatre troupes, musical revues, artist colonies, arts and cultural festivals, and other live entertainment largely aimed at summer tourists.

One of these early arts pioneers was the Peninsula Players theatre group, which held its debut performance in July 1935. The first year of performances was immediately met with praise, including excellent reviews, national press coverage, and adoring audiences who began returning year after year to take in the new shows. The group’s success inspired other artists and performers to set up theatre troupes and musical traditions that persist to this day. Jens Jensen’s The Clearing Folk School (1935), among other still-thriving institutions, was founded in this period as well.

By the late 1960s, Door County’s reputation as a top Midwestern vacation destination was well established. The continued expansion of the national highway system and infrastructure (gas and service stations, roadside attractions, etc.) and increasing number of families with not only cars but the leisure time to take extended vacations in this period contributed to the region’s popularity in a big way.

But it wasn’t until 1969 that the county began receiving substantial national attention. That year, National Geographic—long a coffee-table staple in American households—ran a gushing 30-page feature story about Door County.

The region was thrust into the national spotlight like never before, and the image of Door County as a land of unsullied natural beauty, of artistic and spiritual inspiration, of abundant cherries, apples, freshwater fish, and farm-fresh flavors, fully entered the popular imagination.

The number of families traveling to Door County for vacation as well as the number of businesses setting up shop to support and monetize this influx of visitors increased exponentially and only continued to rise throughout the second half of the twentieth century and beyond.