Door County claims a rich heritage of quirky characters, strange traditions, and oddball activities. Many of these are borne of small-town charm, just locals coming up with new ways to entertain themselves on a narrow peninsula isolated from the rest of the state.

Beyond weird traditions and activities, there are the oddball locals, the quirky types that are attracted to, or created by, the tiny communities of the Door.

Almost 50 years ago, “Wink” Larson pranked Al Johnson with the gift of a goat. It ended up on the grass roof of Johnson’s restaurant and created an iconic story. Today, not only is the grass roof still growing and the goats still munching on it every day of the summer, but the goats have become a symbol of Sister Bay itself.

Each June brings the Roofing of the Goats Parade, in which goats are walked through the village to be placed on the roof to kick off the season. It may not be the biggest parade you’ll ever see, but it’s one of the goofiest.

There are few characters as essential to local lore as Freddie Kodanko, the Polka King. Kodanko loved a drink (and many of them), loved his polka, and loved to dance. After losing his driver’s license, he resorted to driving a tractor around the county, where he was a mainstay at County League baseball games, blaring his polka music and finding dance partners. The writer Norb Blei famously profiled him in his book, Door Way, and writer Jim Stingl wrote about him for the Milwaukee Journal, a bit of fame for a humble, gentle-souled man. 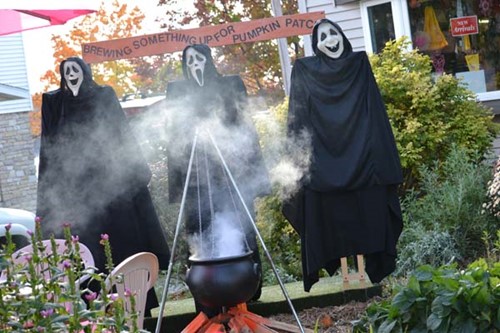 In the rest of the country it’s Columbus Day weekend, but here it’s called simply Pumpkin Patch, the name of the Egg Harbor festival that may be the busiest weekend of the year on the peninsula. A longtime staple of the event is the scarecrow contest, in which businesses and families create elaborate scarecrows and fall displays in their front yards, the contest results in displays that can be childish fun, political, or local inside jokes.

The first thing you notice about the Rhythm Chicken is that, well, he’s not a chicken. His legend is long – he has been popping up on street corners throughout the Midwest for two decades, his rabbit head flopping with the beat as he wails on his drum set.

He appears out of nowhere on street corners, at Brewers games,  in front of restaurants, or in public restrooms (yup, you just have to see it), where he plays a rapid-fire set before disappearing as quickly as he appeared. A favorite of local parades, the chicken has no performance calendar, living in a world all his own. 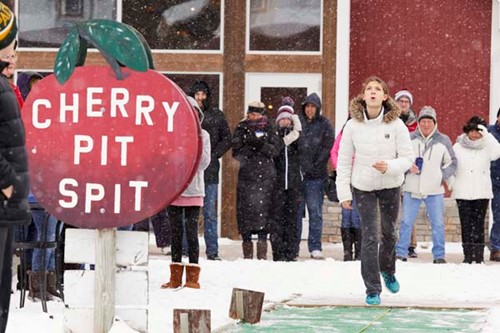 Originally a hallmark of the old Fish Creek Winter Games, the Cherry Pit Spit continues to challenge lungs, tongues, and spitting techniques of visitors to the Door at Lautenbach’s Orchard Country Winery each February. With an endless supply of cherry pits, the spit will never run out of material.

No, we’re not cannibals, and though we may be as skeptical of attorneys as anyone, we wouldn’t have them for lunch. These lawyers are fish, a bottom-feeding fish also known as burbot that locals love deep-fried, boiled, usually in winter when they’re most plentiful.

Love your dog? Probably not as much as the owners who take part in the Door County Scottie Rally and Parade of Scots each May. Led by bagpipers, owners from 42 states and 3 continents have marched their dogs through Baileys Harbor in the 18 years of the event.

The peninsula is home to more than a dozen runs and rides each year, but not all of them take themselves very seriously.

The Fruit Loop Run was started by Bonnie Spielman to add a bit of a fun, healthy start to the Sunday of Winter Festival weekend in Fish Creek.

Dress up in costume and pound the pavement for a “grueling” 1/53 marathon run around Fish Creek.