The waters surrounding Door County are the final resting place for over 240 known shipwrecks. Here's a sampling of wrecks located near the shores of Door County and are accessible with snorkeling or diving equipment. Most can be seen simply by peering over the side of a kayak or boat when the waters are clear, but some were historically significant vessels that now lay deep beneath the surface and will require special gear and training to explore.

Australasia (1884) caught fire on October 17, 1896 while carrying a cargo of coal and ran aground south of Cave Point. Today, she lies in 15 feet of water off Whitefish Dunes State Park.

Christina Nilsson (1871) was a three-masted schooner that ran aground in Baileys Harbor on October 25, 1884. Today, she lies off the old Baileys Harbor Light in 15 feet of water. 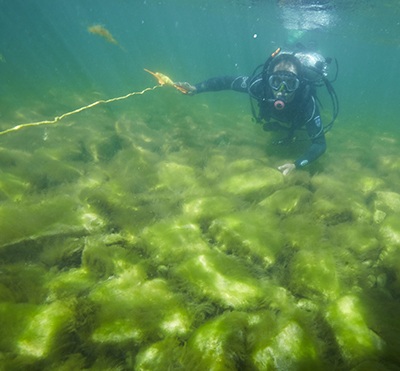 City of Glasgow (1891) was a 2,003-ton wooden bulk steamer that was blown to shore on October 6, 1917 when her tow line parted. Today, her lower hull lies in 3 feet of water in Lily Bay. The Bullhead Point Historic District in the waters of Sturgeon Bay contains the remains of the Empire State (1862), Ida Corning (1881), and Oak Leaf (1866). All three had been used to move stone from the quarries west of Sturgeon Bay but in 1931 they were abandoned and burned at the pier. Typically visible from above the surface, the wrecks are in about 6 feet of water.

The Fleetwing (1867) was a three-masted schooner that ran aground in Garrett Bay on October 26, 1888 and today lies in 15 feet of water near the Garrett Bay boat launch.

Grape Shot (1855) was a schooner that ran aground near Plum Island in early November 1867. Today, she lies in 8 feet of water. What remains of the vessel are well preserved and are important to archaeological research.

Louisiana (1887) was a 1,929-ton wooden bulk steamer that became disabled while riding out the White Hurricane of 1913. She was blown ashore and caught fire in Washington Harbor on November 8, 1913. Today, she lies near the shore, in 18 feet of water, in Washington Harbor. 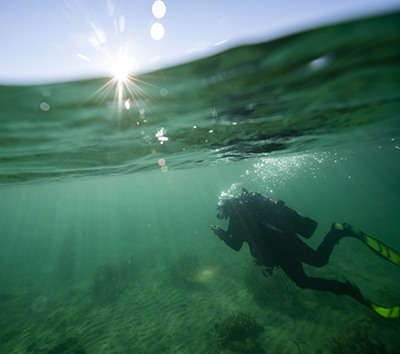 Emeline (1896) was a three-masted schooner that sank that in 1896 as it traveled from Charlevoix, MI to Kenosha, WI when it was hit with high winds and capsized. After failed attempts at salvage, the ship remains in 21 feet of water off the shores of Baileys Harbor.

Perry Hannah (1859), Cecelia (1868), and the remains of the Reynolds Pier make up the Reynolds Pier Historic Site in the waters off Jacksonport beach. Perry Hannah was a two-masted schooner that was stranded and wrecked while loading cargo on October 16, 1880. The Cecelia was also stranded and wrecked while loading cargo on September 9, 1885. Remnants of the wrecks and the pier are in about 6 feet of water.

Frank O'Connor (1892) was a 2,340–ton wooden bulk steamer that caught fire while carrying a load of coal and burned to the waterline on October 21, 1919. Today, she lies in 65 feet of water 2 miles off Cana Island. Her boilers, triple expansion steam engine, and propeller remain upright and intact.

Lakeland (1887) was a 2,425-ton iron steamer that sank on December 3, 1924 in 210 feet of water 6 miles east of Sturgeon Bay. Today, she lies upright and largely intact with many of her cargo of Nash, Kissel, and Reynolds automobiles in her hold. The Lakeland wreck is technically in several pieces, but it rests around the 235-foot mark.

Learn the ins, outs, and importance of protecting and caring for our wild, natural lands and how you can help preserve them.
Review the Principles