Visitor spending in Door County was up $8.1 million dollars last year according to a report released by the Wisconsin Department of Tourism. The publication of the state's 2018 tourism economic impact report coincides with National Travel and Tourism Week, which runs from May 5-11, 2019.

Overall visitor spending in Wisconsin totaled $13.3 billion last year, according to the annual economic impact study prepared for the Wisconsin Department of Tourism by Tourism Economics. That’s a statewide increase of 4.86% compared to the $12.7 billion visitors spent in Wisconsin in 2017.

In Door County, the $366.6 million in direct visitor spending last year supported jobs for 3,237 people and provided $81.2 million in wages for those year-round and seasonal residents that work in the county’s tourism industry. Visitor spending also generated $38.8 million in state and local taxes. Total business sales from tourism, which includes direct and indirect spending, totaled $469 million in 2018, an increase of 2.71% over the previous year.

Jack Moneypenny, President and CEO of the Door County Visitor Bureau (DCVB), said the annual economic impact figures continue to show how vital the travel industry is to the state of Wisconsin and to Door County. “We are pleased to see the tenth consecutive year of visitor spending growth in Door County, and along with it, the positive impact these dollars have on our residents and all 19 of the communities we live in here,” Moneypenny said.

Between the employee wages generated for residents and the taxes generated by visitors, tourism’s economic importance to those that call Door County home is profound. If it weren’t for the tax revenue generated by tourism spending, each household in the U.S. would pay an average of $1,340.00 more in taxes each year.

In Door County, the incremental growth in annual tourism spending over the past ten years totals $109.5 million, a 42.59% increase since 2009. Room tax collections increased 60.31% during that same time span, from $3.05 million in 2009 to $4.89 million last year. 2009 is a notable year as it was the first year that all 19 of Door County's municipalities were part of the Door County Tourism Zone.

Tourism is the primary economic driver for Door County, and Moneypenny says the DCVB continues to work on new and innovative ways to promote the destination to travelers around the world.

View/download a two-page fact sheet on the economic impact of tourism in Door County by clicking on the image below. 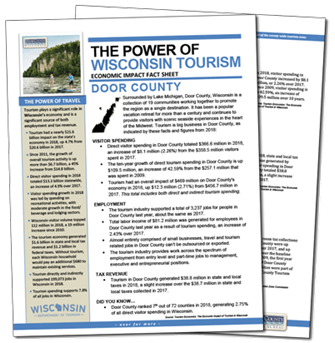