This year, Friday, October 8 marks the 150th anniversary of the Peshtigo Fire that ravaged numerous towns in Door County and adjacent counties, took the lives of more than 1,200 people, and was one of the deadliest and most destructive fires in US history.

Usually referred to as “The Great Fire of 1871” or “The Peshtigo Fire,” the singular “fire” actually refers to at least three separate forest fires that all broke out on the same day in the same area. The Peshtigo Fire(s) is unrelated to the Great Chicago Fire and Great Michigan Fire that also occurred on this day, but the fires were all the result of the same weather conditions.

To commemorate this dark day in local history, the Belgian Heritage Center will host The Great Fire of 1871: 150th Anniversary Special Remembrance, a series of events that includes a film premiere, talks from experts, a historical reenactment, remembrance vigil, poetry readings, and other educational offerings.

If you can’t make it to these events, another way to reflect on the Peshtigo Fire and remember the lives of those who perished is to read about the incident, consider how it shaped local history, and try to take away some lessons about life, community, and starting over.

On an autumn day in northeast Wisconsin in 1871, a series of fires broke out on the Door Peninsula and several other sites on the west side of the Green Bay.

The fires were the result of logging and farming fires exacerbated by exceedingly hot, dry, and drought-like weather conditions that had beleaguered the Upper Midwest for months prior. These conditions combined with strong winds, conflicting weather systems, and lax fire practices to create the perfect conditions for forest fires, which eventually developed into a massive and highly destructive firestorm.

As the firestorm grew larger and gained power, it overwhelmed nearly every town, building, and person in its wake. In all, between 1,200 and 2,400 people perished in Door County and other Wisconsin settlements that night, and many towns were completely devastated, including the newly built Williamsonville.

The widespread devastation is hard to overstate. Millions of acres of land, both wild and farmed, were destroyed. Entire settlements were wiped out. And the few people who managed to survive were scarred, both physically and emotionally, from witnessing their families, neighbors, and hometowns being consumed by the fires.

After the firestorm finally died down, residents were able to slowly yet surely rebuild their towns and build others anew, thanks to both statewide and nationwide restoration efforts. 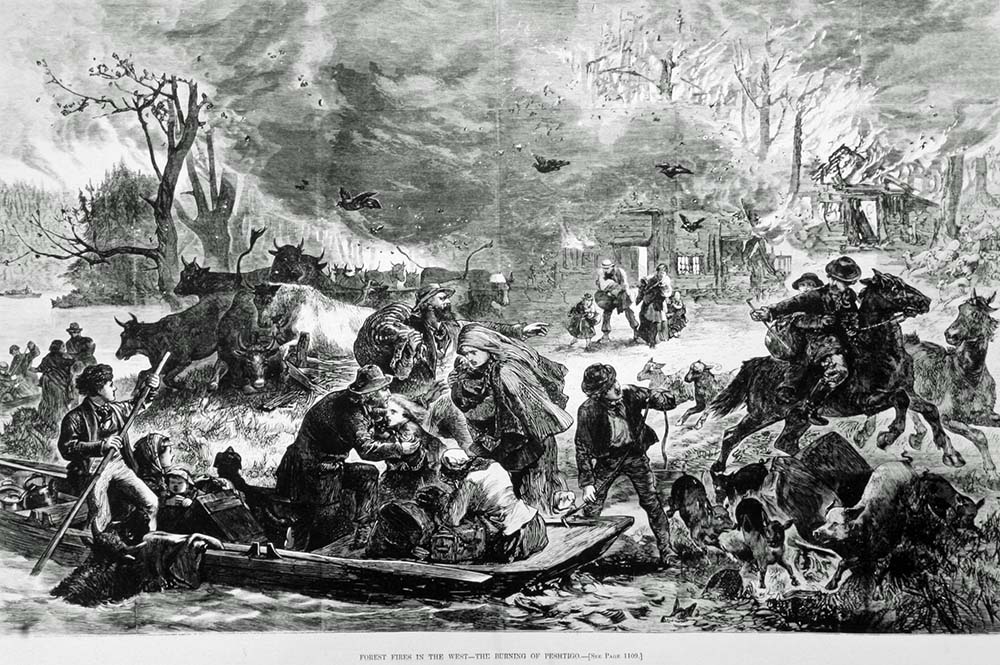 But of course, more than anyone or anything, it was the people of Door County and their indomitable community spirit that reimagined and rebuilt their towns, homes, farms, businesses, infrastructure, and nature spaces. This rebuilding period helped set the foundations for the Door County we know and love today.

In modern times, Door County has a few historical sites where you can learn about the fires and pay tribute to the survivors.

Get a more detailed telling of the night’s events in this Door County: Unearthed video.