Door County is known for its fish boils, cherries, local wine, and beer, but similar to the rest of the state, we also are home to some fantastic cheese factories that make unique cheese right here in the county! After all, Wisconsin is American’s Dairyland, and that’s evident year round here in Door County.

The county is now home to two cheese-making factories that use milk from local farms: Renard’s Cheese since 1961 and Door Artisan Cheese Company since 2016. And, like the dairy farmers they work with, their work is never done. Production is daily, year-round, with no cessation during the off-season. This means visitors also have access to the fresh curds, a variety of artisan cheese, and daily samplings. Both factories offer tours and the chance to talk with resident cheesemakers. 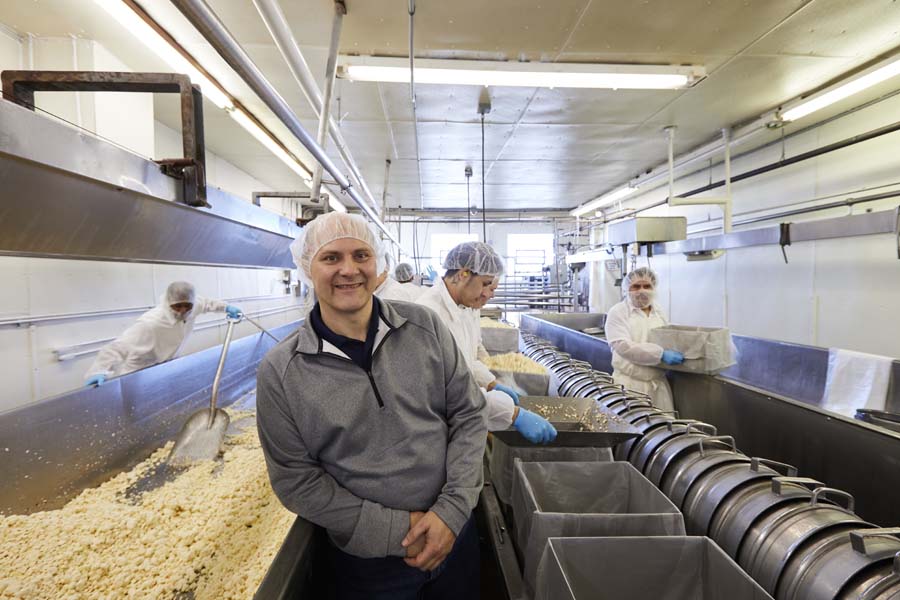 Renard’s Cheese uses milk from dairy farms within 30 miles of the factory, primarily from within Door County. Master Cheese Maker Chris Renard is a third-generation cheesemaker, following in the footsteps of his grandfather and father. Since launching the company in 1961, the production has more than tripled. The factory processes about 90,000 pounds of milk a day and makes more than 50 types of cheese and cheese spreads.

At the Sturgeon Bay shop location, an impressive variety of cheese is on display. The shop offers daily samples, and if you’re lucky enough, you might get to try some of the fresh-made cheese curds, the kind that have a squeaky quality to them! These curds appear on restaurant menus across the county and beyond.

Fresh or fried, they are squeaky only if consumed within the first few days of being made, which is why the fresh daily curds are so popular.

One of the other top-selling varieties includes the Terrific Trio cheese. It’s a blend of Cheddar, Parmesan, and Gouda, with a slightly crumbly texture and salty, savory flavor—ideal for grating over pasta and salads or savoring by itself.

Other varieties include unique flavor combinations such as: Morel and Leek Jack, Maple Syrup Cheddar, and Cranberry Jalapeño Monterey Jack, to name a few. Visitors are invited to partake in the free, 30-minute cheese and wine tours given daily, year round.

Door Artisan Cheese Company, the second cheese factory to call Door County home, in Egg Harbor launched its cheese production in early 2017 and since then has been busy making its selection of cheeses on location. The factory uses milk from local dairies and Red Barn Family Farms, a sustainable and humane family-farm co-op based in Appleton. Visitors can see the cheese-making process in action through a large viewing window from their location, and cheese cave tours are also available. 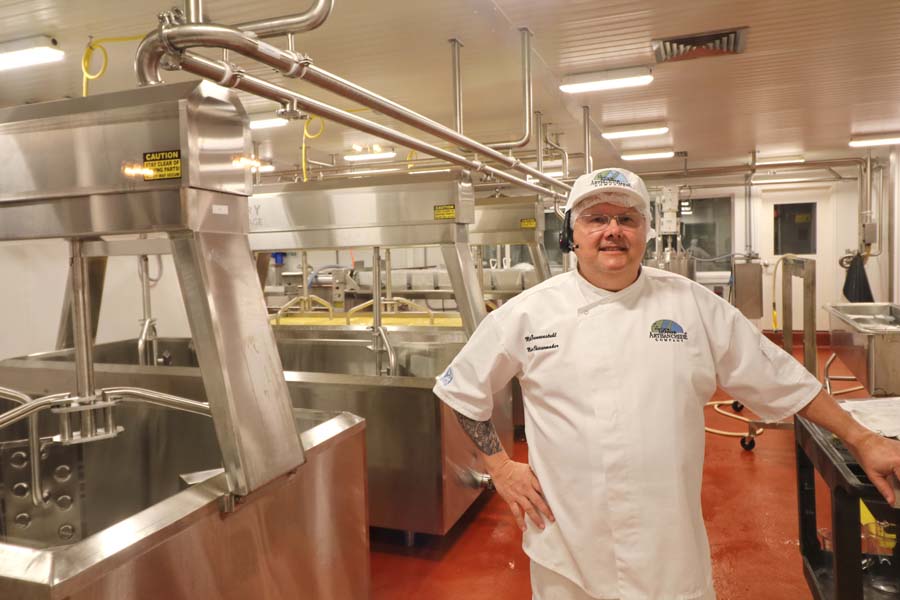 Their market, the Cave Market, features a wide array of cheese, plus additional domestic and imported varieties. You can request samples of cheese, wine, and spirits. The attached restaurant and bar, Glacier Ledge, is a wonderful location for lunch and dinner or just a shareable snack and cocktail.

Looking to stock up on some cheese? For local flavor, try the Valmy Cheese, a cheesemaker’s original, which is aged with a beer-washed rind or the Zivile, a Swedish-style fontina aged two to five months that is excellent for melting to create a creamy pasta or fondue. 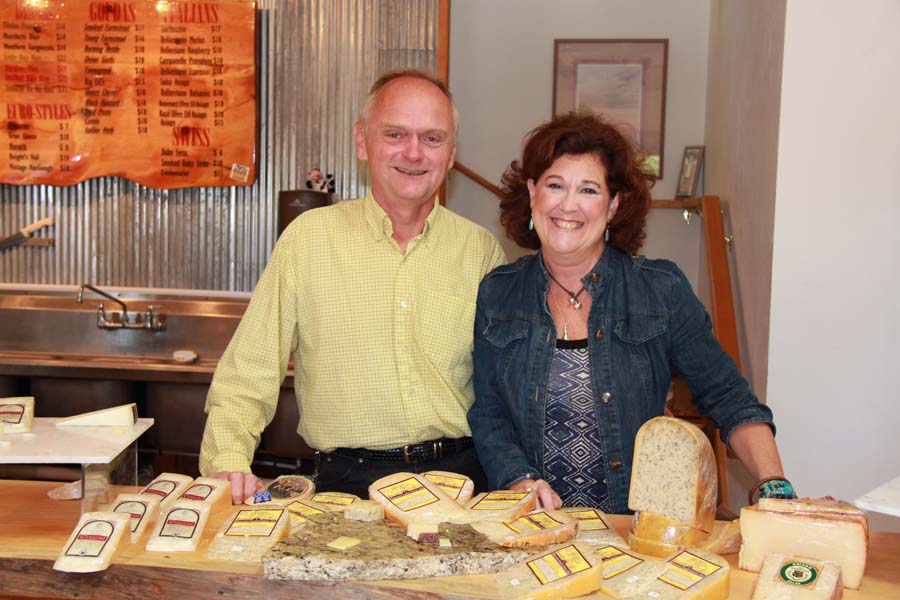 And finally, if you’re on cheese kick, definitely visit the Wisconsin Cheesemasters shop in Egg Harbor, next door to Harbor Ridge Winery. All of the cheeses are made right here in Wisconsin by artisans and masters throughout the state. Almost none of the cheeses are available at stores outside of Wisconsin and most of them are equally hard to find even within the state, and they are some of the most lauded and award-winning cheeses in the world.

There are only 60 Master Cheese Makers in the country and all of them live and work in Wisconsin, giving Wisconsin it’s renowned reputation for creating the best of the best cheese. These cheeses not mass produced and are made using ancient techniques and a great deal of effort - being developed and perfected over the years. Stop by the shop and sample local wine and Wisconsin’s finest cheese for a dairy good time. 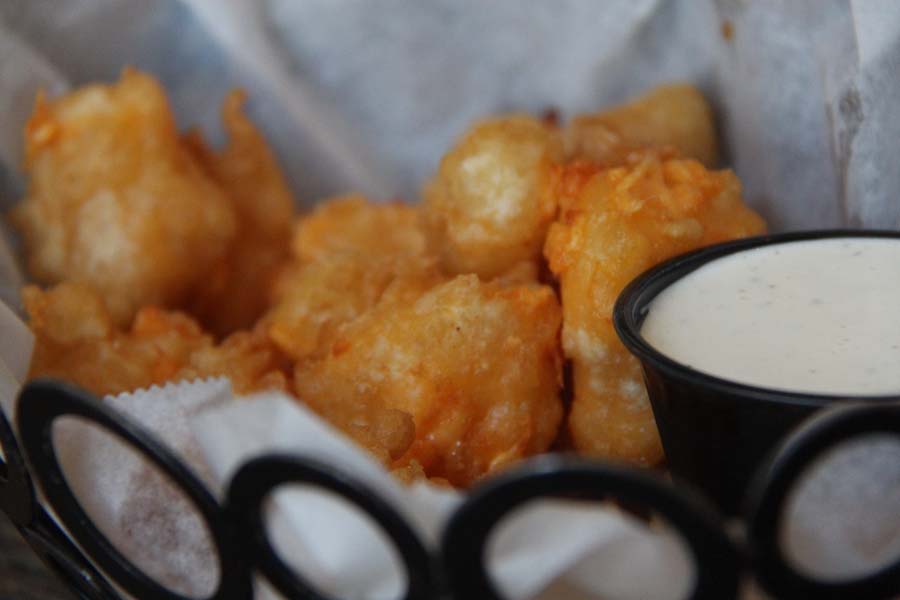