Peninsula State Park is one of Door County’s best winter wonderlands. With 16 miles of cross country ski trails, 17 miles of snowmobiling trails, snowshoeing and ice fishing, it’s just as popular when the weather gets cold.

But there is a downhill history in the park that sets it apart from anywhere else in the state. In the old days, it was the ski jump and toboggan run near the present-day Nature Center. Today, it is Hill 17 that bring a thrill to locals and visitors alike.

In the 1930s, with the help of Franklin Delano Roosevelt’s New-Deal-army of young men in the Civilian Conservation Corps, the park refurbished dilapidated wood into a ski hill that was the focal point of many winter Sundays for locals.

The Nature Center that marks the location of the jump today was first built in 1939 as a warming house for those going up and flying down the bluffs through the winter. There are few alive who still remember the ski jump and toboggan run, which were both abandoned in the 1940s, but a clipping from the Door County Advocate during the Cherryland Winter Carnival at the park describes its importance to locals during the harrowing time of World War II.

“K.O. Jacobson, Door County’s expert ski jumper who represents the club at the big time meets all over the Middle-West, came flying through the air, to land and ride out through the big “V” for Victory. The band struck up the ‘Star Spangled Banner.’ It was a scene of sheer beauty, and especially inspiring at this particular time.”

The last event at the “Big Slide” was held in 1943 and the ski jump was dismantled shortly after the war ended. While it falls squarely under the reminiscent category of Things We Lost, Hill 17 on the other side of the park brings joy to downhill winter enthusiasts today.

It is hard to imagine that a close-cropped fairway so pristinely green on its way to the 17th hole of one of the county’s most popular golf courses could transform so dramatically into a favorite winter activity. But when the snow falls on the peninsula, the 17th hole of the Peninsula State Park golf course transforms into a downhill runway of sleds and smiling children. 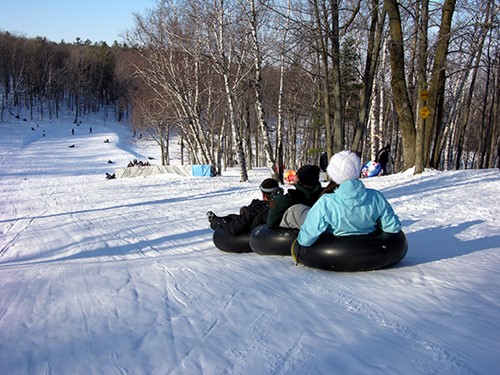 The Department of Natural Resources notes simply on its website, “The hill is steep,” a gross understatement for anyone who has braved one of the largest sledding hills in the state.

“Little kids think Hill 17 is a mountain,” local Laura Beck wrote in Door County Living magazine remembering her time on the northeast Wisconsin mountain. “It seemed to take forever to work those little legs all the way to the starting point. Eyelids peeled backward. Cheeks burned from the chilly wind. Stomachs flew up to the throat and fluttered.”

It is a feeling many locals and visitors can call to memory instantly and it is still there for all looking to spend a snowy winter day in one of the state’s most treasured state parks.