Door County is home to breathtaking natural beauty at every turn, but you’d be hard-pressed to find natural features to surpass these 9 natural wonders of Door County. 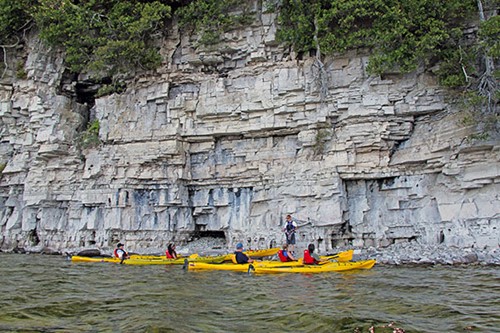 But for a true appreciation of the landscape the escarpment creates one must get out on the water for a topside view of the towering rock bluffs that guard the landscape, rising hundreds of feet from the shore below.

In 2018 Ellison Bay becomes home to the Niagara Escarpment Interpretive Center. The center will be home to exhibits and visitor information and serve as a base for programming, hikes and lectures.

More on the Escarpment

It’s not the easiest beach to get to, but it’s one of the most spectacular on the Great Lakes. Located on the north side of Washington Island, this horseshoe shaped beach features Caribbean blue waters and a shoreline covered in smooth stones.

Located in Whitefish Dunes State Park, Old Baldy is the highest sand dune in the state, rising 93 feet from the lake below. 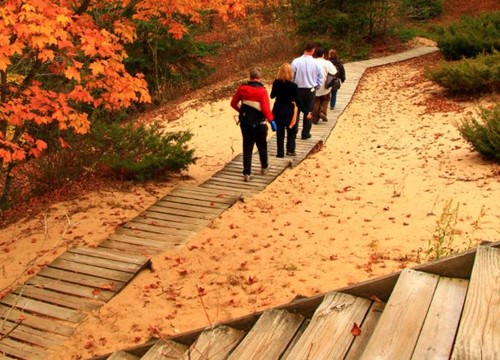 Whitefish Dunes State Natural Area preserves the largest and most significant Great Lakes dunescape in Wisconsin. The complex of active and stabilized dunes protected by Whitefish Bay along the Lake Michigan coast contains a rich flora particularly adapted to this dynamic habitat. All stages of succession, from open beach through northern mesic and wet-mesic forest, are found in the grounds surrounding the dune.

The wind and water constantly change and reform the dunes. The winds off Lake Michigan forces the sand to drop and form a pile. 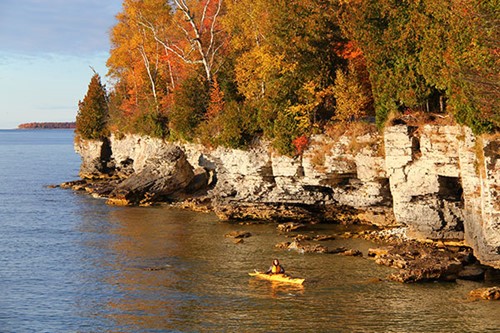 Just up the road from Old Baldy is Cave Point, one of the most popular spots in the county. This stunning shoreline of rocky caves is a must-see for visitors, whether it’s crowded with kids and kayakers in July, or shrouded in glistening ice in January.

Door County sits on a geological feature called Karst topography, vertical tension fractures that crisscross the surface of the dolomite bedrock. These fractures have acted as a conduit for water for millions of years. This water wears at rock, creating cracks and caves beneath the soil.

Cave Point is one of the best examples of the resulting landscape. Waves crash into the rocks as they have for thousands of years, creating a thundering boom and carving caves into the rock of the escarpment below.

The Town of Baileys Harbor is hugged in natural splendor – Lake Michigan to the east, Kangaroo Lake Preserve to the West, and the captivating swales of The Ridges Sanctuary to the north. 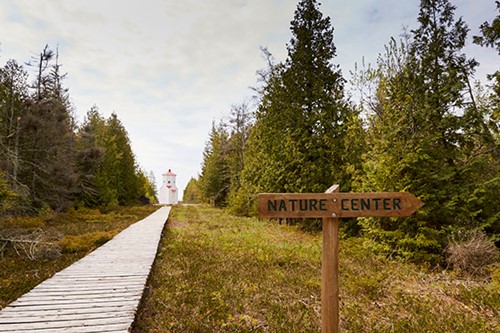 The sanctuary preserves a series of 30 ridges and swales formed by the continual rise and fall of Lake Michigan over the last 1,400 years. The ridges and swales create incredible biological diversity. The preserve is home to 475 different plant species, making it the most biologically diverse ecosystem in Wisconsin.

In 2015 the Cook-Albert Fuller Nature Center opened, giving the 80-year-old preserve a new home and face, and a gateway to the landscape it’s famous for.

Death’s Door, the strait linking Lake Michigan and Green Bay, between the tip of the peninsula and Washington Island, was once one of the most notorious, treacherous stretches of water on the Great Lakes. Among the ships lost in the waters here are the A.P. Nichols, Forest, J.E. Gilmore, and the Fleetwing.

Death’s Door’s reputation for rough waters, unpredictable weather and hidden shoals have made it something of a legend with shipwrecks and accounts of lost lives to back it up. You can experience the passage in much greater safety than the original explorers by taking the Washington Island Ferry. 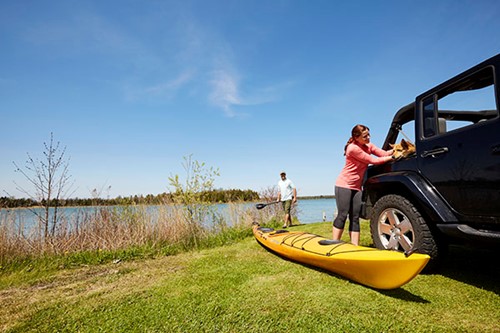 This pristine habitat is so remarkable that Fodor’s travel guide in 2009 called it one of the 500 places you have to see before it disappears. Waters from the Mink River and Lake Michigan combine to form this freshwater estuary. Enjoy a habitat almost identical to that witnessed by the Potawotami Indians, who lived here more than 100 years ago.

A leisurely canoe trip from Rowley's Bay to the spring-fed headwaters of the Mink River provides a great opportunity for bird watching. The estuary provides habitat for spawning fish, migratory birds, and other animals that thrive in its 2,165 acres.

The night sky is stunning when viewed anywhere in Door County, but nowhere do the stars shine as bright as they do at Newport State Park. Recognized as one of 49 International Dark Sky Parks in 2017, Newport on a clear night offers spectacular panoramas of the Milky Way.

Newport is especially good viewing territory because it is situated in the sparsely populated northeast edge of the peninsula, where little light pollution poisons the view over Lake Michigan to the east. 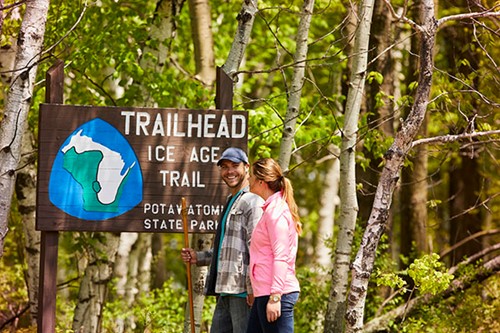 One of just 11 National Scenic Trails, the Ice Age Trail follows the path where more than 12,000 years ago an immense flow of glacial ice sculpted a landscape of remarkable beauty across Wisconsin. As the glacier retreated, it left behind a variety of unique landscape features.